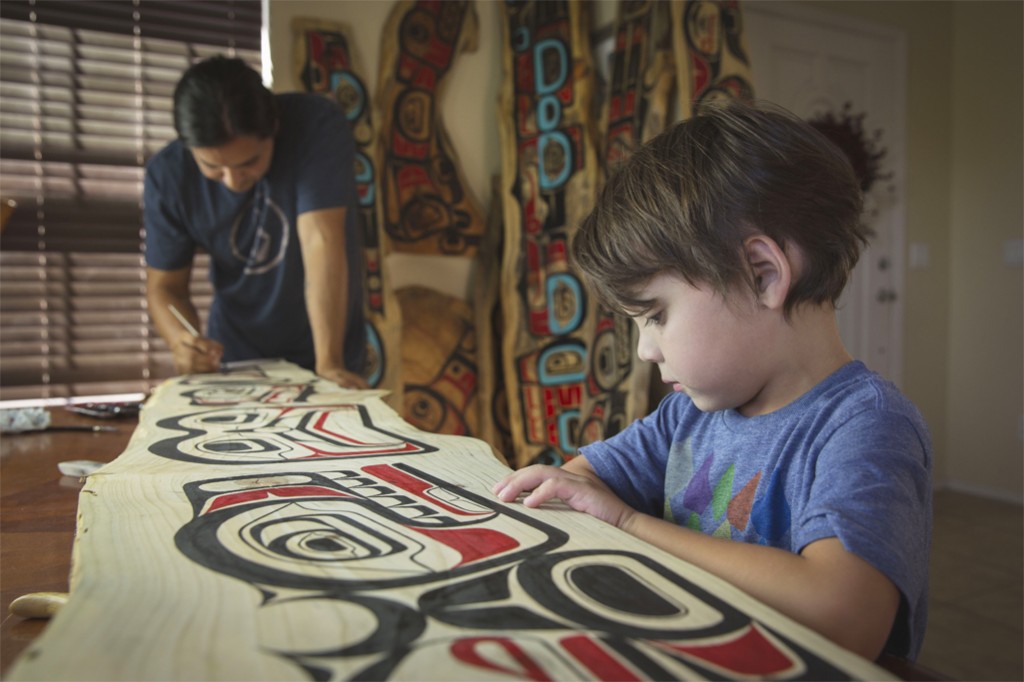 Here it is: Part 2 of our "Power to the Makers" spotlight on James Johnson. Revisit Part 1.

DCS: Tell us about N-grained Gallery and your involvement in that.

James: Mark Landvik actually founded N-Grained Inc. 5 years ago. It was when he blew out his knee during the filming for Art of Flight, he focused on woodworking and decided to start a business, but it wasn't until May 2015 that he wanted to make N-Grained Inc. an artist collaboration.

Mark and I grew up snowboarding together in Alaska. As kids, we also played on the same little league baseball and football teams. Over the years we kept in touch and when I started carving masks he'd trade his snowboards for them. He was always a fan of native art. I remember I got a phone call out of the blue from Mark saying, "I have some artists coming up to my house in Bellingham, WA, I'd like you to come up for the weekend."

2 days later I was on a plane. Jamie Lynn picked me up from the airport, that was pretty wild. He is such a legendary icon in snowboarding. I learned he was really into Native Art as well, and was a huge fan of (one of the all-time greatest Haida artists). That weekend I banged out an Eagle piece on a beautiful piece of live-edge Spalted Maple. I didn't realize it, but the trip was like a job interview.

When Lando dropped me off at the airport after, he told he wanted me as one of the featured artists for his company N-Grained Inc... Since then, everything took off. The purpose for N-Grained Inc is to create authentic pieces of art that are rich in culture. I don't have the words for how appreciative I am for the opportunity. Mark has opened up a lot of avenues for me as an artist, I'm really thankful for that. He's also learning form-line and carving masks now, too. He's killing it. Most people just need someone to believe in them, to give them that little spark to be inspired and Mark did that for me with N-Grained.

DCS: What's next for you?

James: We have a lot happening this year. This past June 2 of my pieces were selected to be featured at the Juried Art Show in Juneau, AK at the Walter Soboleff Cultural Center. The show runs thru end of September. also just brought me on as an artist, it's such an honor to be associated with them. is working to make Juneau the capital for Northwest Coast Native Art.

I'm also delivering a piece to the Volcom headquarters soon, they have a ton of amazing art inside there. I'm happy to have the opportunity to share Tlingit art with them, it's great exposure for our culture. We are also going to set up art pieces at Baldface Lodge in Nelson, BC for the upcoming winter season, it looks so beautiful up there. I'mm set to paint a mural in Montreal, CA this year sometime, looking forward to that. An architect in Vancouver approached us about carving a totem pole for his client's house. Lando and I are excited for that one and I want to get Jamie Lynn involved on that one, too. We'll carve it out in Bellingham.

We're planning a re-launch for ngrainedinc.com with a bunch of new goodies very soon. Also looking forward to seeing Brainfarm's new vid, premiering in September. I know Mark has put a ton of work into that, can't wait to see it. Other than that, we'll take things as they come, we're always open for new ideas.

Thank you to Vans and Volcom for the support. Sealaska Heritage in Alaska. Lando for everything. My wife Gretchen for supporting me through all this; it wouldn't be possible without you. My late father Franklin, I miss you everyday. My son Elias, you're the reason I live.

DCS: Thanks for opening up your incredible world and sharing with us. That. Was. Amazing.

James: Thank you to Diecutstickers.com for the opportunity! Thank you, Daniel!